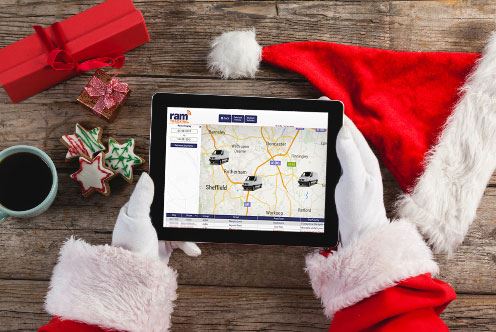 Imagine our surprise when, earlier this year, we received a call from the big man himself, Father Christmas! He wanted to enquire about our GPS vehicle tracking for his sleigh, to increase his productivity on Christmas Eve.

Father Christmas (he told us to call him Nick) had mentioned that last year, he didn’t feel as though he was quick enough when delivering presents. We explained that our system could improve his productivity by finding the most efficient routes and restricting times spent at different addresses.

Nick had first thought of GPS vehicle tracking when he had received a letter from the HMRC about private mileage. He wanted to make sure his elves weren’t taking the sleigh out over the weekend. RAM Tracking’s system allows him to view the whereabouts of his vehicle in live real-time or using the historical reports.

It’s a dangerous job, being Santa Claus. Nick told us that his wife worries about him every Christmas Eve. We highlighted that RAM’s GPS vehicle tracking would be useful for Mrs Claus, as she could get an accurate ETA and know that he was okay. We also recommended she download the RAM app, so she can view his whereabouts whilst she is on the move too!